Aside from the copious amounts of shouting and weird, weird, too weird moment where Schmitt describes his sexual technique to a lesbian gynecologist, last week’s episode of New Girl, “Eggs,” did raise a notable topic:  waning fertility.

Cece and Jess contemplate their fertility.

I was dubious at first that the egg-count blood test Jess and Cece took actually existed, but apparently it does. Actual fertility testing can be much more invasive (and I suspect would render sex about as romantic as trying to grow salt crystals on a string in 5th grade), but if all you want are hormone levels and an egg count, the blood test will do the trick.

As my contemporaries and I round the corner and start looking down the barrel of 30, this seems to be coming up more and more. Suddenly, we’re like the carton of milk that hasn’t been opened two days before the expiration date. If I eat cereal for every meal and make some creamy soup will that get me in under the deadline?

At some point in your late 20’s the world looks at you, raises their eyebrows and says, “No, but really. It’s time to get serious and make some babies.” Not that some women need the outside pressure. Plenty of friends report that every time they see a pair of tiny little baby booties they feel their uterus burning (I take cranberry pills, so that doesn’t happen).

If external and internal pressures magically align in a financially, relationally secure situation, then you are set. You’ve got all the support in the world to grant your own greatest wish. That only happens, maybe 2-3 times in life, so enjoy it.

However, if you are: 1) single, 2) enjoying your career, or 3) apprehensive about motherhood, then run a hot bath, pour a glass of wine, and put on your favorite “I can do anything!” anthem, because here comes the next great female dilemma.

If you are single…

It’s ironic that Jennifer Aniston’s character Rachel on Friends that brought up issues of 1) dating with babies in mind (The One Where They All Turn Thirty), and 2) having a baby as a single woman (seasons 8-10). Then she made the movies about it, The Object of My Affection and The Switch.  And now, real Jennifer Aniston’s baby-making is long term tabloid fodder to a frenzied, fanatical degree. Her personal and professional identity are inseparable from her womb-status. 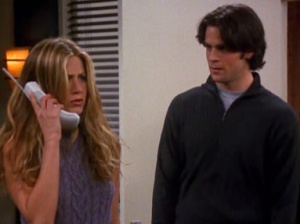 Jennifer Aniston and Eddie Cahill as Rachel and Tag, a romance doomed by family planning, photo from friends.wikia.com

When you are in your early 20’s, finding “the one” and having babies is like this sort of epic adventure with trolls and witches and even the precious golden ring.  My friends who are older and single tend to be more pragmatic. It’s really healthy, because they are no longer looking for an NFL quarterback who runs a Sub-Saharan philanthropy in the off season, and has a couple of best-selling records as a little hobby on the side. You know, just his poetry set to music.

But whether your approach is pragmatic or idealistic, most women don’t just get to say, “Alight. I’m going to get married now.” There’s this other person involved. This other person who will be fertile until he dies, and may or may not be in any rush to divert money from his travel/entertainment fund. Not to mention, if mating, not dating is the goal here, you have to consider whose genes you want to pass on. Here’s a hint: they may not be the ones that are most liberally scattered throughout the state.

In your 20’s the matrimony mavens tell you not to compromise. In your 30’s it’s like you’re President Obama and the dating pool is Congress (though probably still more likeable) and those kindly mavens become the pundits prattling on about the fiscal cliff. Or rather, the fertile cliff. The Bush Era tax cuts and your ability have children are about to expire.

So why not just hit up the sperm bank and have kids as a single woman? Best I can tell, unless you are a megawatt Hollywood star who can afford a full time nanny, chef, and chauffer, single motherhood is really hard. I can’t say that living childless into your 80s will be easy, but it seems less risky. Just my opinion.

Here’s the rub, your late 20’s are the same time when you are probably either 1) settling into a new career( one that you actually like), or 2) finally making some headway in your career of choice.  Your most biologically fertile years are also your most professionally fertile. And nothing says, “thanks for the health insurance,” like getting pregnant.

In a country without mandatory paid maternity leave where very few companies offer child care or nursing flexibility, women bear the brunt of the professional sacrifice of having children. Not every time, but most of the time. It’s a mammary gland thing.

So the career that you love will enter a tenuous balance in which you are at the mercy of your employer to be able to tend to sick kiddoes, nursing infants, and doctor appointments without suffering professional repercussions. Legally, I don’t think they can fire you. But they don’t have to promote you.

Maybe you have a loving, pro-family, progressive work place. Maybe you don’t. Only one way to find out (convince the girl on the second floor to have a baby first and get her to tell you how it goes). My opinion: it is bat shit crazy that we do not have federally-mandated maternity leave and breast-feeding allowances.

On the other hand, if a woman wants to stay home, and her circumstances allow for that, I think she should. Nothing makes the office more thankless and dreary than comparing it to something else you’d rather be doing.

Women who are raised as equal achievers to men and then choose to stay home are incredibly industrious. They were raised to dream big, and that energy gets diverted into the business of home. They tend to do creative stuff with their kids, home, and food, and often venture off into other pursuits that are enhanced by home life. Hence most good Etsy merchandise, the plethora of part-time professional photographers, realistic cookbooks, and half the content of the internet.

Inevitably, both sides— those who choose to stay home with their kids, and those who go back to work— will feel like the world is against them. Our insecure ears have a special sensitivity to the insecure rants of the opposition. If you stay home, you’ll feel judged by feminazis. If you work, you’ll feel judged by the mommy blogs. Welcome to the world, new mom. You’ll never get it right.

Which leads me to my last Fertile Cliff crisis point.

Those who fear motherhood…

You are married to a successful, supportive, loyal man. Your job is very child-friendly. Or maybe you are just ready to be done with the corporate grind. So why are you not taking your temperature and keeping a fertility calendar?

Because the very assumption that if you are a normal female then you should want kids (badly) tells you there’s something very very loaded here. Your relationship to reproduction and the things you reproduce is going to define you more than you might want it to.

If your kids consume you, you’re getting it wrong. “You’ve got to have a life, or you’ll have nothing to give!”

If your kids don’t consume you, you’re getting it wrong. “You are the only mother your children will ever have.”

If you go to work, you’re getting it wrong. “Letting someone else raise your child.”

If you don’t go back to work, you’re getting it wrong. “Letting down the women of tomorrow.”

If you never complain, other moms resent you. If you complain too much, no one wants to be around you.

You cut your energy level in half for the next few years due to less sleep, more illness, and frequent trips to the doctor. Yet you’re expected to perform at the level of someone who had not recently been inhabited by another nutrient-sucking life form and then kept up all night being gnawed on by the same person.

They keep telling you it’s worth it…but then they say something about how they just want to pee without interruption. And the childless woman has no frame of reference for the “worth it” part, but she does know what it’s like to have sleepless nights and interrupted poops.

Women who fear motherhood are frequently cast as selfish, too. As though 1) their eggs are suffering psychological damage from neglect, and 2)  having your identity subsumed by a relationship is something trivial. A professor of mine, told this story:

“I had this student and she was brilliant. But she got married and had kids. And all I can think is that those kids are going to have no idea how talented their mother is.”

It’s true. Your mom could have been the first female President of the United States. You still woke her up in the middle of the night so she could feed you. You would not have loved her any less if she had been a washerwoman, as long as she hugged you and fed you. While that is immensely comforting, it’s also a little unsettling. It means that it will be incredibly hard to explain to my kids that there is something more important for me to do than to fix them a snack or read them a book sometimes. I thought my mom was awesome…”now drive me to soccer practice.”

It all adds up to the reality that motherhood is, yes, a very noble calling. But it’s a big one, and understanding that makes things a little…nervous.

For women facing the fertile cliff, every option seems perilous. Either have kids before she’s ready or maybe never get to have them at all. Or risk the expensive possibility of having to bring the medical industry into your bedroom. Whatever our choice,  there’s a Grover Norquist and a Timothy Geithner of fertility out there ready to tell you that if you’d just do what they say, you’ll avert disaster.

14 thoughts on “The Fertile Cliff”