We Planted a Tree [Part I]

This is our sapling Taxodium mucronatum:

Among the many cool CPS Energy programs, the tree giveaway is my favorite. It’s hard to get super jazzed about Energy Star Appliance rebates, and Enegy Saver Home Management, even though we appreciate them. But free trees? Hoo-RAY!

As the sole utilities provider for San Antonio, it’s good to see them give back. I heard someone make an argument for benevolent dictatorships once, and that sort of how I feel about CPS. In theory, I’m a fan of choice. In reality, I like CPS, and would probably choose them anyway. If being a monopoly allows them to give away trees, I’m not so terribly opposed.

I even found myself standing in Woodlawn Lake Park’s Earth Day celebration handing out free CPS trees to Westside residents. At the beginning of the day they could choose between such drought tolerant and attractive Texas natives as Eve’s Necklace, Mexican Buckeye, Redbuds, Possumhaw Holly, and more. As the day wore on, the choices narrowed considerably, until all that was left were Possumhaws and an entire grove of Montezuma Cypress.

Throughout the morning, two master naturalists carried an ongoing discussion as to whether or not Montezuma Cypress trees, which typically grow along rivers banks, were actually drought tolerant. If indeed they are not, then the middle of the bone-dry Westside in the middle of the 3rd worst drought in the city’s history might not bode well for the survival of the Montezumas.

(According to Wikipedia…they are both drought tolerant and usually found in riparian areas.)

At any rate, their audible debate did not bode well for marketing the Montezumas. So at the end of the day, I eyed the remaining saplings, looking like little Charlie Brown Christmas trees, and thought, “Well, kids, one of you has got to survive.”

I happen to have access to a creek on my husband’s family ranch. Gallagher Ranch is a fine specimen of the Edwards recharge zone, and this has just the sort of springs and soils in which cypress trees thrive. Whether or not Montezumas can actually flourish in any Westside back yard may be up for debate, but on the banks of San Geronimo Creek they seem to do quite well.

So on a Friday night Lewis and I headed out to the ranch with out friend Liz and her pack of dogs. We walked the creek bed until we found the perfect place.

We set the tree in. 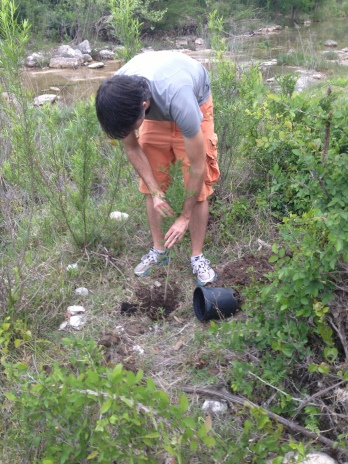 I covered his roots. (I’m posing here…this is not the posture of someone actually shoveling.)

Now we will hopefully watch him grow. 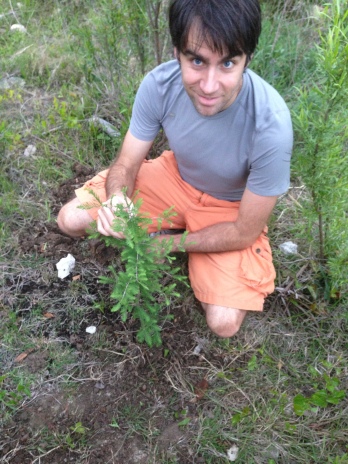 If you’ve never planted a tree, I highly recommend it. I could wax on about the poetry of the experience, but I think that would only muck up it’s utility and grace. There are times where the poetry is in the doing, not the reflecting. Planting trees is one of those things.