Our dear friend, Colin, is leaving us in August. He’s going to Boulder, CO (of course).

Lewis is sad to loose a kindred spirit. I am sad to lose one of our only friends who doesn’t think that all of my adventure ideas sound ominously fallible. In fact, Colin trumps me in great ideas that are more…grand… than anticipated.

So, in honor of his departure, we’ve begun to execute what I will here dub the Last-Call Adventures.

May 18 was Canyon Lake Gorge

This is Canyon Lake Gorge.

Walking along the Canyon Lake spillway feels like a trek into a wasteland. Concrete severs the limestone in an attempt to solve a different man made problem (erosion of the man-made dam, which was built to make the lake), this scenario tends to proliferate when left unattended. Canyon Lake itself was born for flood and drought control, because German settlers insisted on inhabiting an area that is more flood-prone than anywhere else in the country. Barry Commoner might have had some thoughts on what we were setting ourselves up for here.

Lewis and Colin surveying the landscape.

Case in point: A massive flood event in 2002 that crashed over the Canyon Lake spillway flooded homes, washed out roads, and moved enough earth to cover a football field under 30 stories of rock, soil, and flora. The flood carried such force ( 7 feet deep over the spillway at 67,000 cubic feet per second) that it ripped a giant gash in the land, exposing millenia’s worth of fossils, footprints, and geological features.

The laceration is now known as the Canyon Lake Gorge. The only way to gain access is by paying a for a tour from the Gorge Preservation Society (GPS). So that’s what we did.

Our guide was clearly a geology/archaeology enthusiast, and thus we spent the bulk of our time looking at fossils and dinosaur prints. There was also a rather excited 8 year old in our group, so fossils and dinosaurs were winning topics. However, since Colin is an environmental reporter who writes mostly about water and water issues, and Lewis is a spring fanatic, we took issue with our guide’s overall dismissal of the hydrological significance of the area. But we did learn a lot about fault lines and local dinosaurs, so the day was a most definitely a significant net gain, educationally.

The first layer of limestone to tear away under the flood waters revealed several dinosaur tracks. Personally, I buy about 70% of what any given paleontologist says on the matter because in grad school I became sort of a slave to sample sizes. However, these are undeniably footprints in the limestone, put there by the controlled fall of a bipedal creature long before several feet of limestone formed on top of it. Given the rate of limestone production in nature, the size of the print and the length of the stride…I’m convinced, and awed. 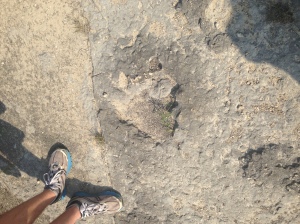 This is a very unphotogenic dinosaur footprint. 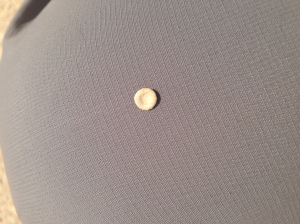 We proceeded deeper through the strata into the gorge. Each limestone shelf gave way to another stunning feature, more forensic evidence for times past and the general behavior of the earth’s crust. 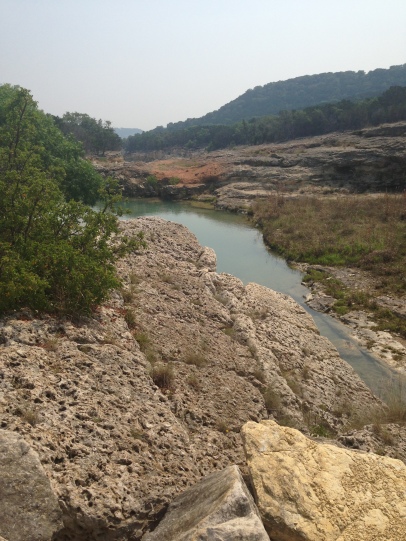 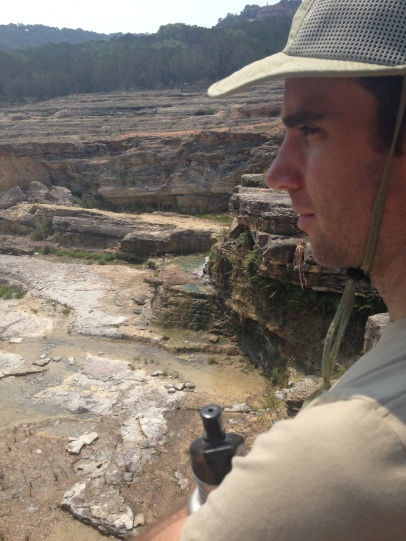 Limestone is porous, and so for the Edwards Aquifer dependents in the group, witnessing both the porosity and the solubility of the stone was a telling look into how we get our own water. The water in the gorge leaks out of the lake, though the porous ground, as well as underground canals carved out by persistent rivulets over time. Lots and lots of time. A similar process created the Edwards Aquifer.

Our guide lost me a little bit when he snubbed the Edwards Aquifer Authority for placing water restrictions on San Antonio to save the fountain darter, tampering with right of captures laws (I think that differentiating between surface and ground water is absurd as well, but while I’d like to see ground water protected like surface water, he’d seemed to be advocating for the reverse). He also assured us that fracking would not hurt our drinking water and that the aquifer was far deeper than we would ever need it to be. Oh the confidence of those who don’t have to drink other people’s “rights.” Except that he did spend a few minutes ranting about an ex-business partner who poured motor oil into a hole in the ground near enough to effect his private well. 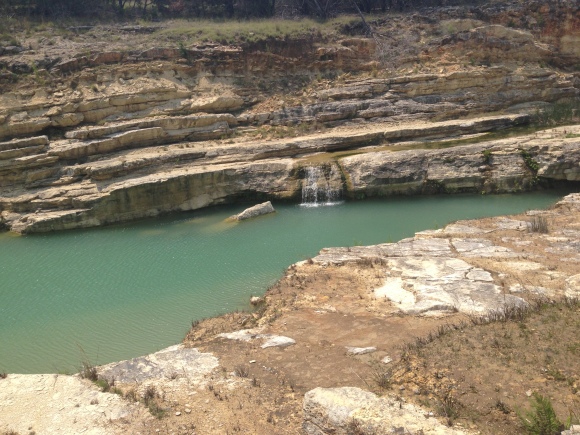 This water does not belong to you.

We progressed to an examination of the Hidden Valley fault. The dramatic effects on the rocks as they press and jar against each other is magnificent. It looks like wreckage, and yet its presence makes rivers possible, and fills our aquifer. We also learned the term slickenside, referring to the scrape marks caused by the hanging wall (moving plate) moving against the footwall (stationary plate). I think it sounds like something you’d find at Schlitterbahn.

Under the careful explanations and occasional soap-boxing of our guide, our three hour tour matured into 4.5 hours, but even the 8 year old weathered it well. It’s an amazing place, though I am a little leery of industry building around it, even something as noble as the GPS. It just seems like when a human ties their livlihood to the whims of nature,  the battlelines are drawn. Already there are power washers involved.

I highly recommend the trip, if you are heat/sun tolerant, and fond of a good hike. Take a note from Gilligan, and don’t build your plans around a three hour tour. We lost Colin to a work commitment about 3.5 hours in. On the way out I heard the 8-year-old say, “I feel so bad for that man. He had to leave right before we got to all the fossils!” Darling, but untrue. We’d seen 3.5 hours worth of fossils. But I admire his enthusiasm for the final sites.

Canyon Lake Gorge, as it is now, is the museum that nature made. Her response to Canyon Lake. Her moment to show off what she’s been up to for so long before we were looking.