The Campaign Trail: Day One

Occasionally  I throw around the idea of running for public office some day. I have a family history of public service…and big ideas about how to help San Antonio.

Yesterday, I got a little taste of what my life would look like if I were a candidate for public office in San Antonio.

9:37-11 am – go to meet a friend at the Farmer’s Market, end up running into 10 other friends, holding am adorable baby, meeting friends-of-friends, etc.

Noon-3pm- Juneteenth Celebration/Neighborhood Association Fundraiser. Knowing this was a neighborhood association thing, I expected the usual mix of African American, white, and Hispanic folks serving up bbq plates and hanging out at picnic tables.

Instead, when we got out of the car at the park we’d never been to on the city’s southeast side, the beehive in my stomach erupted, like on the first day at a new school. We looked like conspicuously pasty glowworms.

For the next three hours I had a blast serving up grilled chicken and potato salad… and  thinking of a compelling answer in case someone finally voiced the question that was surely on everyone’s mind: “What the hell is that yuppie white girl doing in here?”

Of course, everyone was far too gracious for that. They said, “Thanks for helping out! Hope you had fun!” And I did.

4-5:55pm– Lake|Flato pool party. Where I (along with the senior partners in the firm) constantly whispered “who’s that?” to Lewis whenever new hires and interns came through the gate.

6-8pm– Dinner with friends. It ended at 8 only because I could tell that I was about to fall asleep sitting upright, and that control over what I said was waning.

If I were actually stumping, I’d have headed off to a gala, benefit, or rally. But by this point, I’d already made up my mind. I’m not running for office. I thoroughly enjoyed each activity today…but when they fire out of the canon bam-bam-bam like that…I don’t think I stopped talking until 8pm when I simply stopped making sense.

I know someday I’ll think I’ve changed my mind. The desire to do good and effect change will convince me that, yes, I can totally take on one more thing. I’ll be convinced that it will be energizing and exciting.

I know myself, and that’s the sort of lapsed memory/judgement/ability to asses reality that gets me into trouble every time. So, in an effort to do my future self a favor…I’m going to post the following pictures, and just nip that campaign in the bud.

Future Bekah, this is for you. You’ll thank me later: 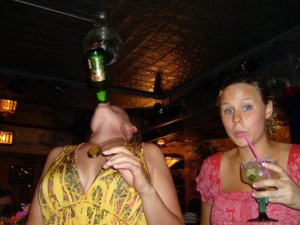 2 thoughts on “The Campaign Trail: Day One”