Signs your local coffee shop is now managed by Christians

I sometimes work from coffee shops. Like when my house is being insulated and there’s drills and sawdust everywhere.

Starbucks in not my favorite, mostly because after 15 seconds inside, I smell like burned espresso for the rest of the day.

I don’t usually go for the ultra cuddly coffee shops with the overstuffed couches and “Dance Like Nobody’s Watching” novelty signs on the wall, because they usually only have one plug and the internet doesn’t really work.

So yes. I go to the slightly pretentious, Creative Class joints where the baristas have amazing tattoos and the internet is fast, and everyone is on a Mac. (I’m not on a Mac these days, for the record).

I hadn’t been the Best Chai coffee shop in a while. And today when I came in, I noticed some subtle, but distinct changes. I worked for a few hours, noting little things that seemed oddly familiar, but out of place.

Then I put the pieces together. I could be wrong, but I think Best Chai coffee shop is now under the management of Christians. I thought of other Christian coffee shops I’ve been to. [Note: Christian ministries often run coffee shops as an outreach. I’m all for it. Giving people a place to gather is humane and generous, and coffee shops have been that place since the Belle Epoch, maybe earlier.] 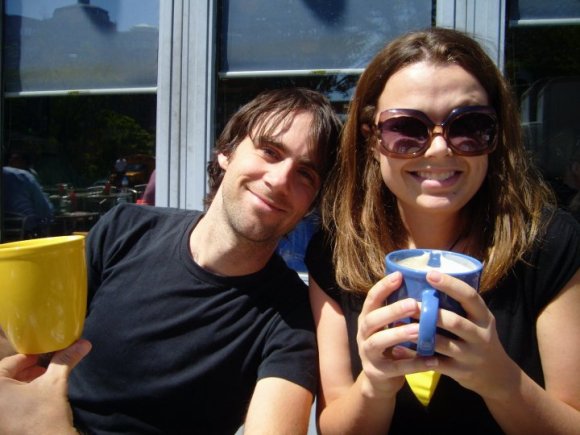 Christian coffee shops are warm and welcoming. They are also usually a haven for neuvopuritans and emergent types. Emergent is probably the dated term, I don’t know what the anti-establishment Christians are called now. I’m out of the biz, so I’m losing my jargon. But they are the Christians who are doin’ their own thang with Jesus. I like them lots.

So yes, I like other Christians and their coffee shops. But I show my love by caricaturing and gently mocking, as my family and closest friends will tell you (go ahead and tell me how not okay that is). If we can’t laugh with ourselves, we’re doomed, folks.

These were my clues that Best Chai had been Christianized:

1) There were more lovely, benign, sepia tinted pictures of Italy on the wall. Before Christian Management Best Chai was more…starkly contemporary. Christian establishments don’t like stark. They are okay with sleek, industrial, etc. They don’t like stark. I have no idea why. So they will usually add something universally pleasant to the otherwise minimalist decor. And for people who have never driven in Italy, ridden the bus in Rome, or paid for a bottled water at the Vatican, Italy is the very definition of “Universally Pleasant.”

By comparison, at Comfy Chair coffee shop, the art on the wall is borderline disturbing (I love it). Lewis’s Favorite coffee shop is stark. Convenient Coffee doesn’t have any art. They have a chalkboard.

2)  There was a child screaming and throwing herself around on the floor while her mother had what appeared to be a meaningful conversation 10 feet away, ignoring the amazing volume of her child’s screams. This only happens in places where mom’s feel like families are valued enough that she won’t be judged for the absolute din her child is creating.

Sorry lady. I love families. I love kids. But my thought was most definitely, “Um…deal with that, please. It’s making my unborn child twitchy.”

3)  There’s a big note proclaiming that they will be closed Dec 25- Jan 1 because they value family and community and they want their staff to be able to participate. Every coffee shop I’ve know to be run by Christians has had weird hours. They take care of their employees, so no one has to work the weird hours, like, say, 3-5 pm on a Sunday or 1-4 on a Tuesday. I have absolutely no problem with this. Except on December 28 when I want a cup of Best Chai.

4) There is a man with a voice far too loud to be appropriate in doors, with a salt of the earth accent talking to the baristas and the people in line with him. Again, clearly he feels confident that he is not being judged, and the baristas are not simply tolerating him. They are engaging and smiling at him. This is welcome behavior here. I have to put in my earbuds because things he is saying keep working their way into my emails.

Just wanted to let you know that your wife’s mother’s scone recipe will arrive as scheduled to your hotel in Witchita Falls on December 25th.”

My client will be thrilled, as he actually requested a bottle of scotch delivered to his hotel in Buenos Aires for his anniversary on January 5th. (the details of this statement have been altered slightly to protect my client’s confidentiality)

Coffee shop inside Cloud in London.

“When We Were Young”- Lumineers

“Come Thou Fount of Every Blessing” – Sufjan Stevens

Something else by Sufjan Stevens

“Awake my Soul”  Mumford and Sons

Something explicitly Christian that I’ve never heard before

Something by Derek Webb

“Somewhere Over the Rainbow/What a Wonderful World” – performed by the giant Hawaiian guy with the lovely voice.

And finally the entire Babel album.

First off, I have zero complaints. I like almost all of those songs. As my co-worker so aptly worded it, I’m into “folk revival” music. However, almost the whole playlist has this heavily emotive anthemic quality that ranges from the vaguely spiritual (Mumford) to the overtly Christian (Come Thou Fount is a hymn…like from a hymnal). Christians love that stuff! Give me something I can FEEL!!! Better yet, give me something I can analyze.  I’m not sure how the Lumineers and Bon  Iver ended up on the list, except that I have to assume that the list was made by someone with similar taste in music to me…and I would totally put them on the list.

6) The guy  working at the table next to me keeps referring to people on the phone as “Brother” and embraces both people who come to sit with him for a meeting. He’s also white and over 25. Very very white. Very over 25. The only white men I know who refer to each other as “brother” and openly embrace in public are employed by the church or in a fraternity. (no comment on the amazing similarity in some cases)

I must say that the presence of clergy is not an immediate sign that a place is managed by Christians. Clergy love coffee.

7) The barista is someone who once, in a former life, invited me to church.

So, here’s to you, Best Chai coffee shop, and your new Christian management. You’re doing a great job. It’s good to know that when I have a screaming two year old, there will still be somewhere for me to grab my favorite chai and a deep conversation.