In which Florence’s family grows.

(read in the voice of Florence, which sounds uncannily like a 14-year-old Claire Danes)

My world has been turned upside down.

In just a few short hours I went from being the single neediest being in this house, to one of the grown ups. Not that I’m not prepared. Just that I wasn’t… expecting it?

Bekah and Lewis left on March 27, with overnight bags, hauling Bekah’s huge self somewhere away in the car. Our friend Lauren stayed with us, which was cool. Then our other friend Liz came to visit…and she brought this little hat with her. It smelled SO GOOD. Like human, but without any good food or dirt stuck to it. It smelled like the cleanest human I’d ever smelled.

I was not allowed to eat the hat.

Then, on March 29, Bekah and Lewis came home. But they weren’t alone.

There was this tiny, hairless little… human puppy?… with them. She smelled just like the hat. Perfectly clean with nothing stuck under her fingernails.

I just wanted to lick her…so much.

And then it started to make it’s distress sound. Life will never be the same.

Her name is Moira Sage. She’s not a lot of fun, in the sense that I have fun.  I mean, she won’t wrestle, and Bekah won’t even let her give me kisses even though I can tell she wants to. I think eventually she’ll be fun, once she’s not so floppy and Bekah puts her out in the backyard with us.  She has tons of toys, which I am not allowed to play with, or even swap out for my own. Tried that. Not a success.

I’m allowed to lick her toes and the back of her head. Which tastes like the little hat…the cleanest, softest tasting human ever. Like if heads could be made out of angel food cake.

It’s made life a little…er, unpredictable. And the distress signal goes off a lot. There are some new smells in the house too, not all of which are pleasant.

And people are ignoring me more. That’s the hardest part.

In other news, Bekah is slightly less fat. Wiley said that the Moira the Hairless Pup must have been the only one of the litter that they decided to keep. I mean, there had to have been at least 4 others, judging by the size of Bekah on the day she left. I wonder where they are…

So, yeah, I guess at some point, we all have to grow up. Give up our place as the center of attention. Let someone else have all the needs. 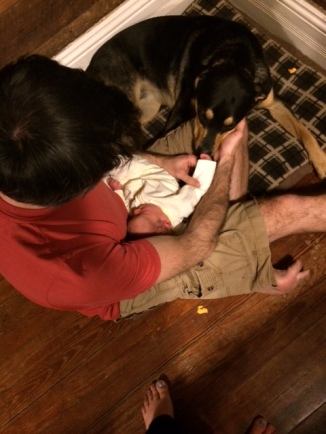