It’s been a while since I’ve blogged. But Christmas always brings out the blogger in me. Most likely because of a long and conflicted history with the holiday and my need to externally process.

This year, with a toddler, we have entered the vortex of American Christmas. “Do you guys ‘do Santa’?” (which is a creepy question). Grandparents are wanting to buy her presents, which leads to conversations about the kinds of toys we want to have in the house, and how much regulation is appropriate for us to exercise in that realm. She also has her own interests, which makes me more inclined to impulse buy all the Daniel Tiger merchandise, bison toys, and musical instruments I see around town. (Yes, bison. That’s her favorite animal.)

We’ve been trying to feed her a steady diet of the real Christmas story as well. The angel announced to Mary that the Promised One was coming to earth…via her belly. And then she and her husband went to Bethlehem. But there was no room for them to sleep anywhere but the stable, so that’s where the King of the World was born.

And Moira furrows her little brow.

We talk about Jesus all the time. But she’d rather talk about the people she knows and loves. Her Nina and Dude. Granny and DougDoug. Cousin Reyvan. She likes to recite the Lord’s Prayer, but she’s most enthusiastic about the “daily bread.” Because she knows what bread is.

So, in a last ditch effort to help Moira understand Christmas, I bought her a plush nativity set. It was a huge hit. Suddenly we are all about the Christmas story.

It should be noted that, pre-child, I would have been very cynical about this nativity set making Jesus “cute” and “sanitized.” The little people weren’t brown enough. They don’t have noses. Yes…I think I used to be kind of an asshole about this stuff. (I still am about other stuff.)

Also, the very fact that I went into the Hallmark store four days before Christmas should demonstrate just how committed I am to my daughter’s spiritual formation. 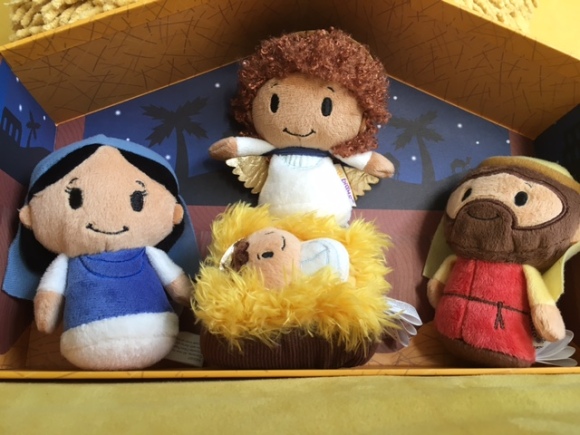 Now, she runs around the house yelling, “I need Jesus!” looking for a misplaced plush baby Jesus.

I know she doesn’t realize the deep truth of what she’s saying, but I do. Like Moira, I need Jesus. I need him to be real and tangible. We all do. Which is why we have Christmas. The Word became flesh, and dwelt among us.

Moira’s identification with plush nativity also reminded me why I take communion.

A long time ago, one of my RUF students was openly frustrated about her desire to overcome sin. She explained that the reward of the sin was so immediate, and the reward of obedience was so delayed. It was hard to make the right choice in the moment.

“Jesus has to be more real than the benefit,” I said.

When Lewis and I were looking for a new church, my one request was that it serve communion every week. Because I need something tangible. Like a plush nativity, there’s nothing in the bread and wine itself (we’re Protestants) that ministers to my heart, but the Truth it signifies is everything. I’m not always mature enough to tell myself the Gospel without a visual aid.

Theologians would implode at my comparing holy communion to a plush nativity set. Which just makes me more committed to the analogy.

Discovering the world with toddlers is amazing. This is season that I was dreading, with its excess, its materialism, and all the hoopla. But it turns out that it’s been my favorite Christmas yet, because someone is running around my house yelling “I need Jesus!” at the top of her lungs.

One thought on “Plush nativities and communion…”