3 Comments
By bekahmcneel faith, Family, Something New and Good

Something New and Good: Asa

On July 20 our family grew by one! He beat his induction by a day, and has kept us on our toes for the last five days and rewarded us with no shortage of snuggles, and pro-level eating and sleeping. I haven’t had time to do much reflecting or meditating…but this is something I wrote in the last days preparing for his arrival. We picked the name Asa a long time ago, and in June and July I became more and more convinced that it was the right name for our boy. Here’s why: 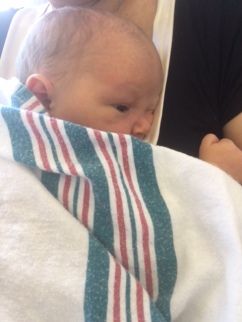 In the grace of the gospel there is a salve for every sore, a remedy for every malady. There is no spiritual disease, but there is power in Christ for the cure of it. – Matthew Henry commentary on Matt 10:1

Asa. It means “healer.” And if ever there were a time when we need healers, it is now. His name will be his charge: to go into the world and right wrongs. To hold hands with the oppressed, and to share whatever power he inherits.

He is our son, born into a world that feels like it is falling apart at the seams. A world that feels broken beyond repair. We did not know when we chose his name that he would be born during a local crime wave, in the wake of explosive racial conflict and the deadliest mass shooting in history. A time when America is so lost for leaders that it is pulling itself apart from the margins.

We didn’t know that his birth would be a bright spot in a pretty dark time.

Rev 21:4-5 ‘Jesus will wipe every tear from their eyes. There will be no more death or mourning or crying or pain, for the old order of things has passed away.” He who was seated on the throne said, “I am making everything new!”

Lately we’ve seen the limits of our own pursuit of justice, how entrenched our generation is in broken systems. We are more free than those before us, but not free enough.

While we do our tiny part to pursue peace, perhaps the most productive thing we can do is to raise another generation into greater freedom, greater awareness, greater truth.

We are naming him in hope, as our flaming arrow into the darkness. We are committing him to the God of Peace, the Great Healer, in hopes that he will do great things.

Matthew 10: 7-8 As you go, proclaim this message: ‘The kingdom of heaven has come near.’ Heal the sick, raise the dead, cleanse those who have leprosy, drive out demons. Freely you have received; freely give.

3 thoughts on “Something New and Good: Asa”