It’s been a week, and we are on a roll with new things!

Day Five: Taking Moira to play at the Pearl Amphitheater

We tacked this on to the end of a walk with a friend, and it was a great success. The rock seats are the perfect height for cruising, which is our favorite activity these days. And the dead grass was a perfect for eating. I was fishing leaves and debris out of her mouth all night. 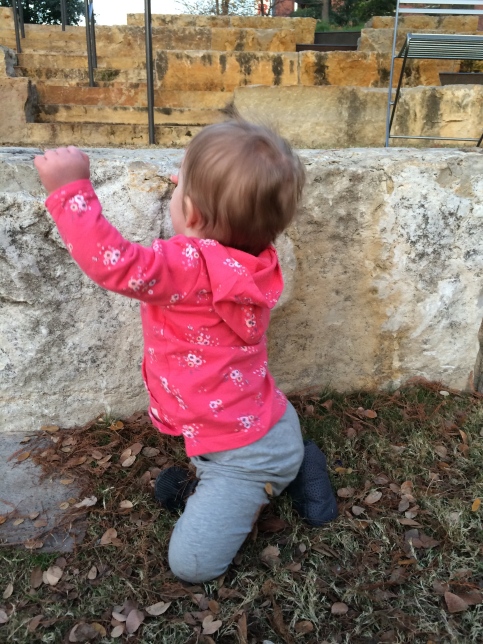 Day Six: Not picking apart my body in our family photos

In early December, we had the special treat of a family photo session with Rachel Chaney. Rachel has photographed me seven times now in the last seven years. Sometimes they were photography jam sessions, where she was learning and experimenting. Other times they were life milestones, like my wedding. All of her work is fantastic and I love it. She’s technically on hiatus, but she graciously agreed to photograph our family in a lifestyle shoot.

We got the proof gallery on Tuesday, day six. The photos are everything I’d hoped they would be, largely thanks to my obliging and adorable daughter, and particularly photogenic husband.

If you read this blog at all, you know that the baby weight adventure has been a thing for me. I am ALWAYS hard on myself in photographs (no matter how good Rachel manages to make me look) and now there is simply more of me to be critical of.

But I tried something new. I decided to give thanks for my body, that carried and birthed a heathy baby and will one day be fitter and firmer, because I am running, cutting down on wheat and sugar, etc. But no matter how well I do, I know I’ll still pick myself apart. So on Day Six, I did not. I gave thanks instead for each beautiful image of our happy, smiling family who loves each other so much.

And you know what…the pictures got even more beautiful, and I enjoyed them more than any before.

We installed our solar panels just in time for a massive cold front and cloudy skies. So we’re not seeing the really cool potential of these things like we will in the sunny times, and when the heat doesn’t run all night.

But just watching how the wattage in your house spikes when the heater comes on is enough to make you layer up and cut the heater down to 65. Maybe that’s the true secret to how solar energy is going to cut carbon emissions.

I feel like I’m gaining points when I see the green part of the graph (meaning the sun peaked through the clouds and the heater wasn’t on).  Actually though, we’re gaining MONEY. How great is that. It’s a computer game where the earth wins.

This screen shot is from our monitoring of what happens when Lewis turns on the Vitamix. The big spikes, though, are the heater. The panels had been operational since 1pm that afternoon.

Day Eight: Eating at a Fruteria/Botanero

I’ve never eaten at Johnny Hernandez’s fruit infused snack bar. I liked it a lot. Fruit infusion lends itself to some killer cocktails. Also, guacamole with grapes. Who knew?

It’s a great spot for a date night too. Lewis, who has been several times, tells me it’s more whimsical by day. But by night, it’s pretty atmospheric.

Day Nine: Art-to-go at Landa Library (or, seeing if Moira is ready for crayons)

Our favorite branch of the San Antonio Library was not as crowded as usual, due to the freezing temperatures. So, Moira and I had all the attention, and allowed ourselves to be talked into an art project. Landa Library will sometimes set up a huge craft table with a simple, fun craft for kids to do at their leisure.

Moira is far too young for the painter’s tape/negative space project they had, but I was curious about having her color.

She is not ready for crayons. She just chewed on them while I made this: