I’m a fan of questions like, “If you had to be stuck on an island with three books, what would they be?” And I’m a fan of the website Ideal Bookshelf, where you can have your all-star library immortalized…because the actual books are…mortal…? I guess people would rather have a drawing of their favorite books all together than just have the actual books together on a prominent shelf. Well, anyway, I think it’s a great website even if it doesn’t make sense.

But, alas, I don’t have $255 laying around to order my ideal bookshelf (immortal or mortal), so I just took some pictures of the actual books which are scattered throughout actual bookshelves in our house (some are missing, as I tend to give my books away). Ideal is a funny word, and these are not the best books I’ve ever read, nor are they the books I think everyone should read. This is more like the reference section for a study on my soul.

(I don’t mention the Bible in this list. I just think it’s in a different category for me.)

Little Women, by Louisa May Alcott

This was my favorite book for a long time. It introduced me to the concept of personalities and how they affected ones social, romantic and familial life. As I’ve said before, I always wanted to be a Jo. But I was such a Meg.

Gave away the unabridged and kept the one with the great pictures.

This was the first seriously meaty book I ever read. It was in Mrs. Stephen’s 8th grade English class. We read it slowly, and discussed it thoroughly, which is the best way to read twisty-plotted 19th century French literature. Because we read slowly, I really really savored it, in a way that I don’t know if I have done since.

This was another 8th grade read. It’s still my go-to resource my tri-yearly crisis of faith.

My 1st grade gifted-and-talented teacher read the entire Ramona series out loud to us, one chapter per class. Ramona Quimby was my original comedic hero.

I love golden era movie star biographies. And Katherine Hepburn was more than just a starlet. I had no idea when I picked up her autobiography that she would become one of my favorite characters in history…not just entertainment.

My Golden Era Hollywood biography section, with other notable biographies scattered throughout.

Til We Have Faces, C.S. Lewis

I read this at the most perfect moment. I was in a critical time of wrestling with bitterness and despair, and in it I saw both the peril of my soul and the antidote.

Atwood inspires me. Social commentary, great story, and sci-fi, a genre I never thought I liked until I read The Blind Assassin. But in Handmaid she’s chillingly good. 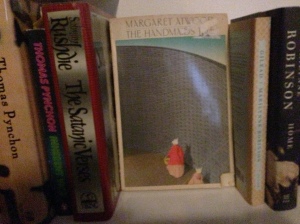 One of the most easily identified pieces of cover art .

This was a pick for Read the Change, and it’s not Kingsolver’s best work, but any stretch of the imagination. It gets preachy, and it’s not as tight as others. But it changed my mind about a lot of things. It taught me things that matter.

Neither Here, Nor There: Travels in Europe, Bill Bryson

Hilarious. Bryson and David Sedaris make me want to learn to write funny. Humor is so hard! Comedians and humorists are some of the most intelligent people in the world, I think. Plus, they get to tell the truth that no one else can. As Oscar Wilde said, “If you want to tell people the truth, make the laugh otherwise they’ll kill you.”

Eye-opening in so many ways for this white girl.

Literary journalism rocked my world. Wolfe is funny, but not laugh-out-loud like Bryson. Not knee-slapping funny. He’s more of a shake-your-head-and-chuckle funny. Because he just gets certain things. He observes the painful parts far too keenly to do anything but wince and giggle.

I haven’t read this since 2nd grade, so it may be terrible. But I loved it then, and I love what it did for me. I still have the mental images and I still remember the feeling of being swept up in a story, which is important at that age. That’s why I think Harry Potter might have single-handedly saved literacy for a generation (no one take me to task on that, it’s hyperbole).

This was my favorite book after college, and I didn’t give much thought as to why…until I gave it to Lewis to read and he said, “This whole book is about perverse sexual situations.” Aha. Somebody was into being “edgy.” But still, really, it’s a great book.

Who didn’t want to be Matilda? And Roald Dahl is one of my heroes. What a talent, really. His imagination is both dark and whimsical, in proportions I aspire to attain.

Gunnar, my brother, eventually shared this love with me. We can still quote the comics back and forth. The sense of humor in them is multi-layered and entertaining on most levels.

The Eames shelf of honor.

I wish I had a penny for every time I wanted to shout, “The lame shall enter first!” 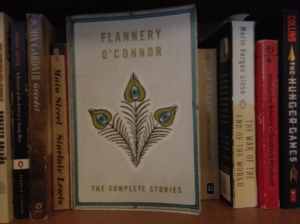