So this is Christmas…

Christmas came without fanfare this year. Partly because I’ve been busier than usual with work and writing. But also because certain traditions and heralds were missing. Christmas did not appear in the places I usually find it.

It wasn’t until today, Christmas Day, that I looked through the pictures on my phone and realized that Christmas came in unexpected ways this year. Some of them were overtly festive, others were the events of normal life that conveniently overlap with Advent. Like the grapefruit tree that obligingly bursts with bounty just when we need goodies to share, and I can’t muster the will to bake.

The photos to follow are not the photos of the things that go without saying, such as family, friends, food, and gifts. These are the images that I only now realize have become traditions. These are the new and surprising places that I’ve begun to find Christmas for myself.

First off, it’s finally time to plug in the Christmas lights. Not hang them, mind you, as they stay up all year. But we only plug them in after Thanksgiving. Any earlier would just be tacky.

It’s December which means that there might be a day or two when it’s too cold for shorts in South Texas. And something about the Christmas spirit means that when the dog gets on the couch because you haven’t gotten around to insulating the floor, you just let him be there.

Our little house came with a fully functioning miniature orchard, which fruits in December. Once upon a time, in the days before Best Buy Gift Cards, fruit was the traditional Christmas gift. We’re bringing it back.

The beauty of an iPhone is that it is available at the times when you don’t think to bring a camera. Also, they can’t take it away from you at the SA Symphony Holiday Pops Concert, so it’s easier to bootleg some good snapshots (though we were only marginally breaking the rules, as the performance had not started).

I did draw the line, though, at trying to inconspicuously take pictures during the candlelight portion of the Christmas Eve service…though apparently not everyone draws the line in the same place on that one, as evidenced by the woman nearly singeing the hair of the lady in front of her while trying to juggle a smartphone and a lit candle to get a photo of her grandchild teetering adorably on the arm of his father (who also had a lit candle).  I’m sure it had 20 “likes” by the time we’d sung the third verse of Silent Night.

The SA Symphony is responsible for two moments of Christmas revelation. The one semi-photographed, and the other one I wrote about for the Rivard Report. 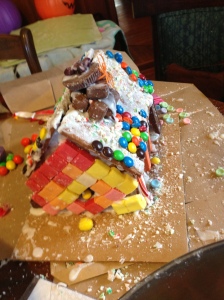 I disagree, as Celeste and I appear to have reconstructed the cabin from “Deliverance.”

Spending Christmas Eve with my family and Christmas Day with Lewis’s family (as well as the full calendar of parties in weeks prior) means that we spend a lot of time in the car during December. The only thing Wiley loves better than the ranch and home is the car ride between the ranch and home. He expresses his delight by breathing his dog breath on the back of our necks and drooling profusely. 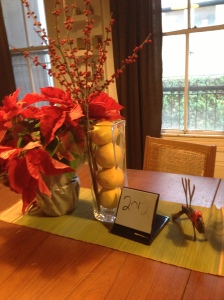 As 2012 fades from the calendar (as it is doing from Lewis’s new Buddha Board here), I personally reflect on it as a year I am ready to leave behind. This was a holiday with some conspicuous absences, but it was good to realize that Christmas was not compromised. Linus was still there to remind me what Christmas is all about. A King in a Manger. A long awaited thing in an unexpected place.

One thought on “So this is Christmas…”