I didn’t do a lot of reflecting on the turn of the year as 2013 approached and 2012 eeked to a close. But a couple of weeks ago, I was offered the opportunity to close the year out with a bang. Or rather, um estrando. A client canceled his trip, leaving a vacant room up for grabs in a Rio de Janeiro hotel. On Copacabana beach. With a view of the New Years fireworks.

The trip to Rio was the ultimate way to “stick it to” 2012, a year that was full of upheaval and bad news. Hop on a plane, soak up some sun and order room service. Be jetset. Come out on top.

It’s not uncommon for me to close chapters of my life by skipping town. A good international cleansing to bookend seasons of growth, struggle, incubation, or serenity.

After a last minute scramble and a lot of tension (can Lewis go? can we get visas in time? plane tickets are how much???), it didn’t work out, and thus I am blogging from my home office, not a Club Room overlooking the Rio nightlife. And the holiday I had was entirely different than the holiday I passed up.

Instead of a plane, I hopped on a Megabus. I guess instead of jetset, I’m coachset.

Instead of the concierge, I hung out with old friends (Rex and Lee are not pictured, but they came to visit on a night that I would have been in transit).

Instead of Copacabana Beach, I sat in a cozy coffee shop on Guadalupe Street in Austin. The people watching was just as good.

Instead of room service I had Kerbey Lane Pumpkin Pancakes (once at the restaurant, and then again at home with this exotic local…)

Instead of in-flight entertainment, I did a lot of this: 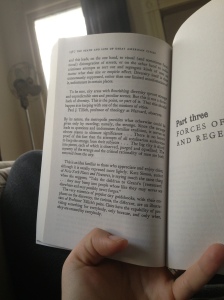 And instead of fireworks from a Club Room in Rio, I watched them from my own bed. In addition to the official display downtown (which we can see to the south), last night it was hard to tell if 2013 or a revolutionary militia had arrived in Dignowity Hill. Fireworks are a major budget line item for our neighbors.

Compared to a trip to Rio, yes, it was a low-key holiday. But it’s a more fitting way to say goodbye to 2012, the year of bad news. Rather than fleeing to South America to dazzle the year into oblivion, it exited through a sieve. Staying home I realized that there were a lot of things from the past 12 months that I don’t want to leave behind. And those things have passed through Christmas and into the new year. I love my friends. I love my husband. I love gingerbread pancakes. And I love our city. God is on the throne. I hope that some things stay just the same in 2013.