My mother raised us to believe that it was not a vacation unless we were staying in a hotel. Simultaneously, however, she earned her title as Mom-Cheapola-Cheapola. I have staying in some serious dives. Serious. What would you expect to find in a Motel 6 on the outskirts of Vegas? Use your imagination.

Or there was the motel in Grove City, Pennsylvania when the snowy gusts rolled in under the 3 inch gap between the door and the floor while I held the phone cord into the wall so we could call home (these were the days of roaming charges).

We stayed in some great places too, don’t get me wrong. Mostly while snow skiing. Mom had the good sense to book comfortable places when the whole family was worn out and wind-burnt. And once we did stay at the nicest hotel in Marfa, just for fun. If I had known I would one day make regular pilgrimages to Marfa, staying in a refurbished Airstream, I think I would have laughed.

When traveling, I learned that a good hotel often redeems a long day of frustration, bickering, and desperation. I spent my last night of my life in Europe at the Gatwick airport Hilton, because I planned ahead, knowing that I would have been dragging a 65 lb suitcase around Europe as I moved home from London via Stockholm, Copenhagen, Innsbruck, Munich, and Venice. I knew I would be tired and nostalgic, so I cut myself some slack, and stayed in the nice hotel for my final 12 hour layover.

Another important hotel was a Red Roof Inn in Tucson, the first place I stayed alone. I was road weary, en route back to school in Los Angeles. I told the guy behind the front desk that I needed two beds. When he told me that would be extra cost, I said, “Oh well…uh…I guess my companion won’t mind sharing a king bed then, though he is a rather large guy…” I arrived to my room to find the lock broken, and rigged a temporary fix with a coffee straw.

So, now I vet hotels as part of my job. It’s so fun. And I’ve quite a collection of favorites.

Opulence is in the Details: Park Hyatt Palacio Duhau Buenos Aires- this place has the best bathroom lighting I have ever seen. The bed, the amenities, the shower drainage. They really did think of everything. It’s in an old mansion and it is by far the most classically luxurious place I have ever stayed.

Communing with Nature: Inkaterra Reserva Amazonica, Puerto Maldonado, Peru – we market this property as a luxury accomodation, and it really is. They do a marvelous job creating comfort and quality out in the middle of the jungle. But the real draw is that “out in the middle of the jungle” part. You arrive by boat. You are given a pair of wellies to wear around the property. There are plunge pools and hammocks and mosquito nets, and all of that glorious tropical gear…and genuine encounters with the Amazon rainforest with naturalist guides.

The canopy walk at Reserva Amazonica

How Chic can You Be?: Hotel St. Cecilia, Austin – I love all of Liz Lambert’s Bunkhouse properties, but St. Cecilia is definitely the most luxe. Each room is a different homage to the patron saint of rock’n’roll, and each bears Lambert’s destinctive vintage-ranch-boudoir fingerprint. It’s exquisite. The record players in each room, the dyed red cowhide rug, the porches. It’s the kind of fancy I want to be when I grow up.

Welcome Home: Quincho Country Home, Puerto Varas, Chile – this is arguably the hotel that got me into luxury travel. We were supposed to go somewhere more adventurous, but the Aysen region of Chile was on strike, and so we were rerouted to the peaceful hamlet of Puerto Varas and 4-bedroom Quincho Country Home. In our 6 days  I had at least three of my favorite meals of all time. Our room, the honeymoon suite, looked out over lake Llanquihue, and our guide forever sold me on the idea of using a guide. We actually struggled a bit with being 28 and 31 and having that kind of experience. If only we knew that upon return to the states, I would change jobs, and this would become our norm. 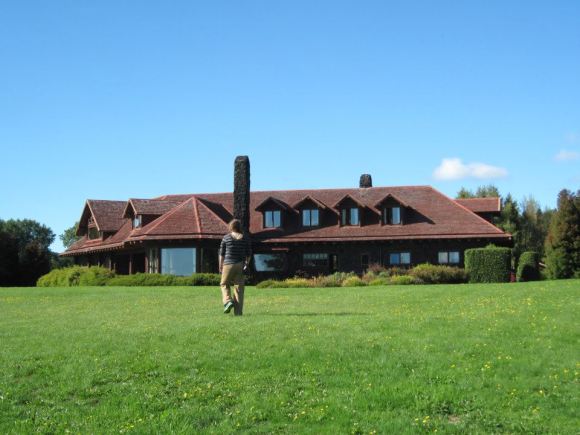 A Hidden Gem: Gardens dei Bonsai, Cortona, Italy – This was one of those experiences made richer by the bedraggled state we were in upon reaching it. My best friend and I were making a grand tour of Europe, which I had “expertly” arranged from my homebase in London. There was nothing expert about it. I used EasyJet and Ryan Air, and we more than made up for the cheap air in taxi fare and extra train tickets getting from their obscure airports to our destination cities. By far the longest, most expensive day was en route to Cortona. Upon arrival at this picturesque convent/winery, the proprieter, Silvia, took one look at us and sent for her son, Francesco.

“I have a better solution,” he said. And he ushered us to a huge two bedroom apartment, overlooking the Tuscan countryside, a solution indeed.

We spend the next three days letting Silvia cook for us, and giggling about handsome Francesco and his “better solution.”

Eco-novelty:  Treehouse Lodge, Playa Chiquita, Costa Rica – this is where we stayed for our honeymoon, and probably the most consecutive nights I have spent in a single hotel. This place, an iguana preserve to boot, reminded me of Spy Kids. We had two different rooms in our two weeks. The first was made of bamboo and had a dutch tub. The second room was the show stopper though. It had an open air living room and kitchen, and the walkway to the treehouse bedroom was a rope bridge. Like on a playground. It was surreal. We woke to the sound of howler monkeys every morning.

Good Taste: Las Balsas Gourmet Lodge and Spa, Villa La Angustura – this was another boat arrival. We crossed Lake Nahuel Huapi to find ourselves on the dock of a deceptively cute hotel. It looked like a kindly aunt or grandmother should come to greet us with a homemade pie. Well, there was no homemade pie, but there was a full menu of amazing cuisine (it’s a Relais & Chateaux property), surprising design elements, and an incredible spa with an indoor-outdoor pool, which we enjoyed despite the 50 degree temperatures.

Charmingly Cool: Hotel Havana, San Antonio, TX – another Bunkhouse property,  this is where we spent our wedding night, and  where I plan to live when I’m an old widow living off the royalties from my many bestsellers. White walls, hardwood floors, dark trim. It evokes all that is romantically imagined from Havana’s golden era. And one little note about Bunkhouse properties. Their ammenities/minibars are outrageously good. They are curated to fit the hotel, and some of the finest candles, kimonos, Virgin Mary candles, and lip balms you’ll ever find. I have a little hotel bottle of lotion from our stay at St. Cecilia that I’ve been holding onto just so I don’t forget the smell.

Life Goal, Met: Shutters on the Beach, Santa Monica, CA – I was 18 when I walked into the lobby at Shutters on the Beach by mistake. I was grubby and woefully green, but with all my wide-eyed wonder, like the bumpkin-makes-good fairytale after which I fashion my life, I said, “One day, I’m going to stay here.”

12 years later, I did. Lewis, Moira and I made a journey up from Thanksgiving in San Diego to spend one night in a hotel that Jennifer Aniston once raved about in In Style magazine. We stayed from check-in to check-out, dining at the restaurant, only leaving for breakfast at a nearby coffee shop recommended by friends who live in the area.

The room was perfectly appointed, charming and elegant. The view of the pier was nostalgic and wonderful. There were homemade cookies at check-in, and hot cider by a fire. Bath toys for Moira, as well as a lovely baby bed. At checkout, the concierge gifted her a little Lisa Simpson doll.

And the bed. I should have a whole list on hotel BEDS. But after my night at Shutters, it would be hard to find more to add. It was perfection.

What is your favorite hotel, do tell…?

One thought on “Wanderlists: Best Hotels- Stayed in”