Leave a comment
By bekahmcneel Florence's So Called Life

In which Florence gains weight.

(In a wistful voice)

Okay. I’ll be honest, I didn’t mind the Little Hairless Pup when she was actually little, and actually hairless. And actually not walking all over the place and pulling my fur and poking my eyes. Now, she kind of gets on my nerves sometimes. Like, sometimes, we’ll be just, like, playing, and it’s like, fine. But then out of nowhere she jams her finger in my eyeball.

The one thing that makes it worth it….is the food.

Oh my gosh, it just gets better and better.

She used to just have tasty fingers after she would stick them in her mouth and pull out the pureed apple/spinach/rutabaga. Hey, when you’re neglected like me, you take what table food you can get. Don’t knock it til you try it.

But now…it’s like…food everywhere. It’s like she’d just throwing food around up there and raining happiness all around her. It redeems every eye-poke and fur-pull.

Or it did…until stupid Bekah noticed the little rolls – they really were NOT that significant – forming around my (really rather trim) midsection. I think could stand to gain a few pounds, really. [Editor’s note: Florence has always struggled with her weight] I mean, I was wasting away on those flavorless peasant crumbs they call dog food around here. [Editor’s note: Florence eats IAMS.]

It took Bekah a few days to figure out what was going on. She kept… commenting on it (gee, thanks. Like I need another neurosis)? Until a friend finally told her that their dog had gotten fat where their son started eating at the table.

I guess all those little black beans and smears of avocado add up? Especially on such a delicate frame as mine.

So Bekah said I could have it one of two ways. I could have less dog food, and keep eating Moira’s scraps. Or I could be kept outside during meals. Draconian, that woman.  Yes, I know what Draconian means. It means she’s like Draco from Harry Potter. Evil.

I was going to take the high road and stick to my meager subsistence. Mostly out of solidarity with Wiley. Who is also getting a few roles, but only when the LHP started eating meat and hummus.  He wouldn’t touch the veggies. Such a boy.

So, my diet was going well…until the day  they let her start feeding herself with the spoon. And then, it was like, why me? The temptation is just…too. Much. 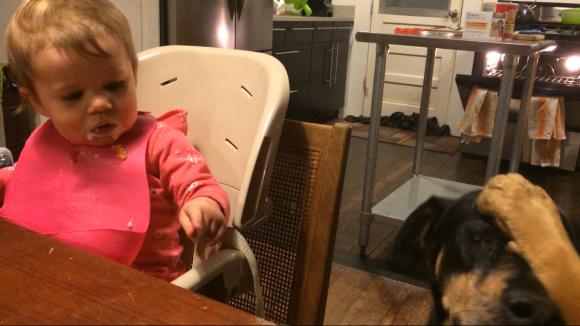