This was a Sauvignon Gris. Not sure what my wine-expert friends would think of that, but there you go.

It was lovely when paired with a bath and a good book. 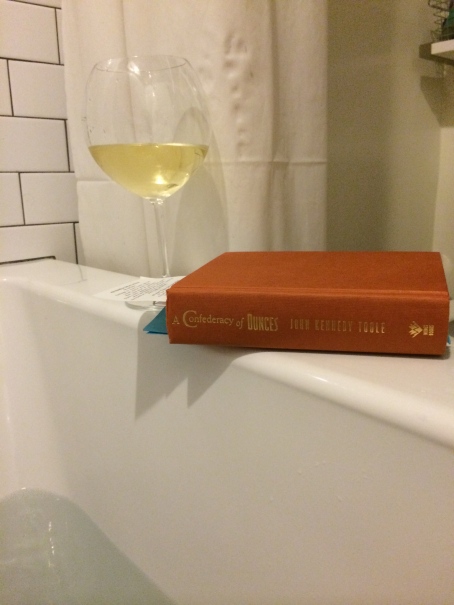 Confession: I got the idea for this one from Moira’s favorite baby food. Ella’s Kitchen Apple, Spinach, Rutabaga is our best bet for getting nutrients into her when whatever solid food we’ve tried that mealtime is flat out fail.

As odd as it sounds, this was not a spur of the moment “oh-gosh-I-need-a-new-thing.” I’d been trying to get to this for weeks. Rutabaga is harder to come by than you would think.

Rutabaga as a vegetable, I found after trying a few different approaches, is, like most vegetables, best when covered in melted cheese.

I’m not going to tell the new thing I did this day. But it involved the courage to speak my mind in an intimidating situation in which I’ve been pretty passive. Well, not any more.

Day 29: Letting Moira have “quiet time” instead of nap time

She simply wasn’t sleepy enough to fall asleep on her own. Instead of growing desperate to the point of nursing her to sleep, I left Moira in her crib for an hour. She sat quietly and played with her doll (and the curtains…and the poorly placed iPod that she could reach…) for an hour. Aside from going in to rescue the iPod, I let her do it.

When I came in at the end of the hour, she was leaning back against her womb-sounds bear, holding her doll, one knee up, elbow resting on that knee, pacifier in mouth, looking at me like, “I’ve got your nap right here.”

The rest of the day…just fine. God is teaching me that he, not my daughter’s sleep schedule is my help and my strength.

Day 30: Posting an honest response to a blog entry that moved me.

But Sarah Bessey’s latest post about love at 2:07am hit home, and I just had to let her know.